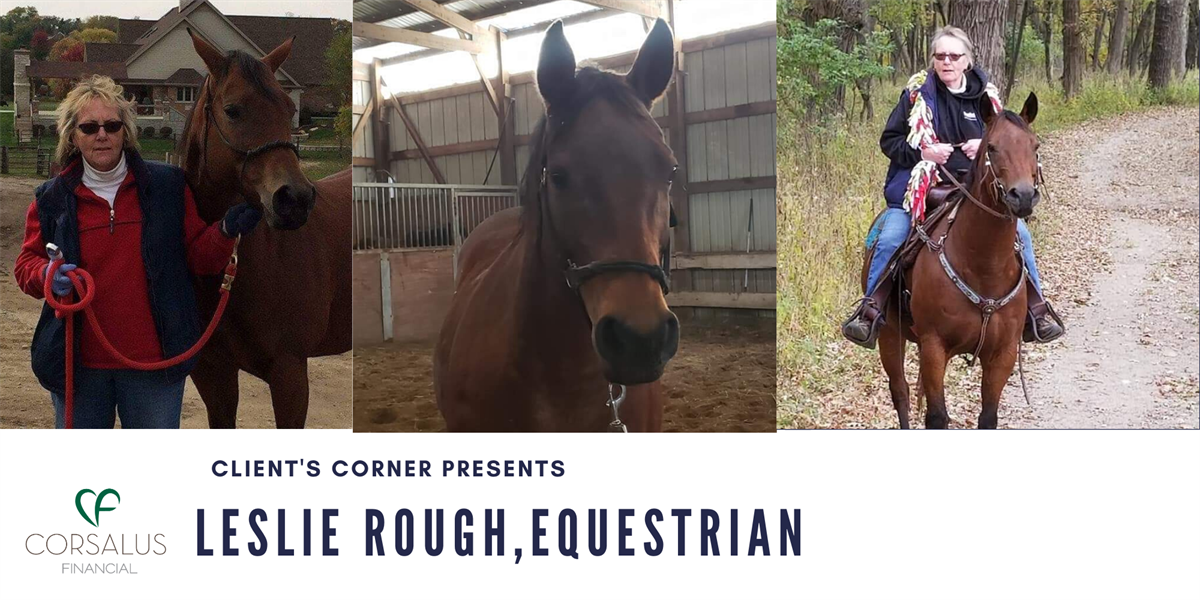 Leslie Rough says it’s a compliment to be called a “horse person”. She remarks that she was just born with the desire to ride. She laughs, “You either have that need, or you don’t. Horse people: they have a love for the animals and a heathy addiction to riding. I’m lucky to be a part of that group”.

As a child, Leslie’s mother would take her to feed the apples horses at Healy Farms in Oak Brook. She has been riding from the age of eleven and says she couldn’t imagine her life without the horses being a part of it. As a pre-teen, she would pay for her riding by working in the barns to clean to out the stalls.

When she was thirteen, in eighth grade, a man was donating horses to the YMCA and Leslie was able to buy her first horse. She rode all over the western Chicago suburbs, in the open farm land in Lemont from Route 53 to Boughton Corners. She had a hand in raising a barn near the Joliet Speedway in the early nineties, and she has friends from many different barns and facilities around the region. She loves to ride her current horse, Baylee, on the forest preserve trails and Baylee also does barrel runs with Leslie’s friend, Tiana. She says that she loves to see how Baylee can appreciate both of them for the different experiences she can have with each of them.

Her sons, Patrick and Shawn were raised riding.  As children, they would ride one behind her and one in front of her; and now they ride beside her. Leslie was pleased to say that when her kids were growing up, she would pile as many kids as she could fit in her Chevy Chevelle to go to the barn to work and ride together.

Leslie is proud to have volunteered in the past at The Hanson Center for Therapeutic Riding, and says she has seen firsthand the benefits of the program for both the participants and the volunteers. It’s blessing and a responsibility to be near the horses, and she enjoys the camaraderie and family that has been created.

Leslie notes that it is such a relief and a joy to ride. She says she often tells friends to leave their troubles outside the trail, and to pick them up on the way out. As long as she can still throw that saddle up, she’ll be riding!

Corsalus Financial is grateful to Leslie for taking time to share her passion and work with us.