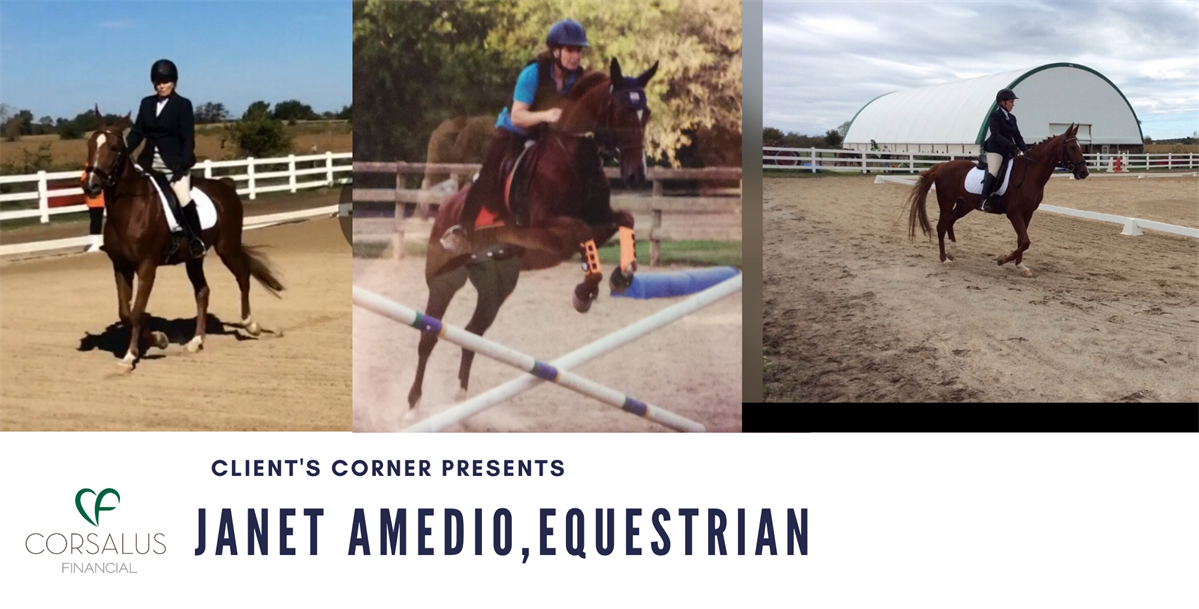 Janet’s mother was an avid rider in her youth, and often talked to Janet about her love of riding.  Janet took a few lessons in her youth, but hadn’t continued into adulthood. When Janet was in her fifties, she looked up a riding facility and called one day, and began taking lessons.  Some of Janet's most treasured memories including riding alongside her mother. She has been riding and showing for over fifteen years now.

Janet never expected to own a horse, and when her mother heard of her new hobby, she dissuaded Janet from the idea of owning a horse, citing the cost and upkeep. Despite the financial investment, Janet purchased Fizztastic, a saddlebred show horse. Janet said she couldn’t believe she had her own horse and it was a great joy and privilege.  She loved riding and showing her until Fizztastic’s death in October 2019.

Janet deeply grieved Fizztastic’s passing and thought she would never get another horse. During that difficult time, her friends told her they couldn’t imagine her without a horse. At their urging, she sought out and found the horse she now currently owns, Summer Revival, in January 2020 from a breeding barn in Springfield, IL.  Summer Revival just turned six and she likens him to a playful puppy. He loves to see her because she brings peppermints- his favorite treat.

Janet said that she has loved enjoying the personalities of the horses she has cared for and ridden. Janet delights in her training lessons and learning different disciplines of riding. She enjoyed showing Fizztastic in Rockford, Gurnee, and Hannaberry, IL. She is currently working with Summer Revival learning dressage. She eventually would like to show him in dressage.

Janet remarked that owning and learning to ride has been life-giving and a great outlet of joy, especially during times of grief and sadness. She said would throw her arms around her horse and was amazed by the size and strength of the animal, but was also so comforted by their presence. Janet currently rides 5 days a week at CR Ranch in Lockport and is enjoying this outlet, especially as so many things in our world have been affected by the pandemic and quarantining. The barn is closed to outsiders, so it has been a place of creativity and joy for Janet.

Corsalus Financial is grateful to Janet for taking time to share her passion and work with us.